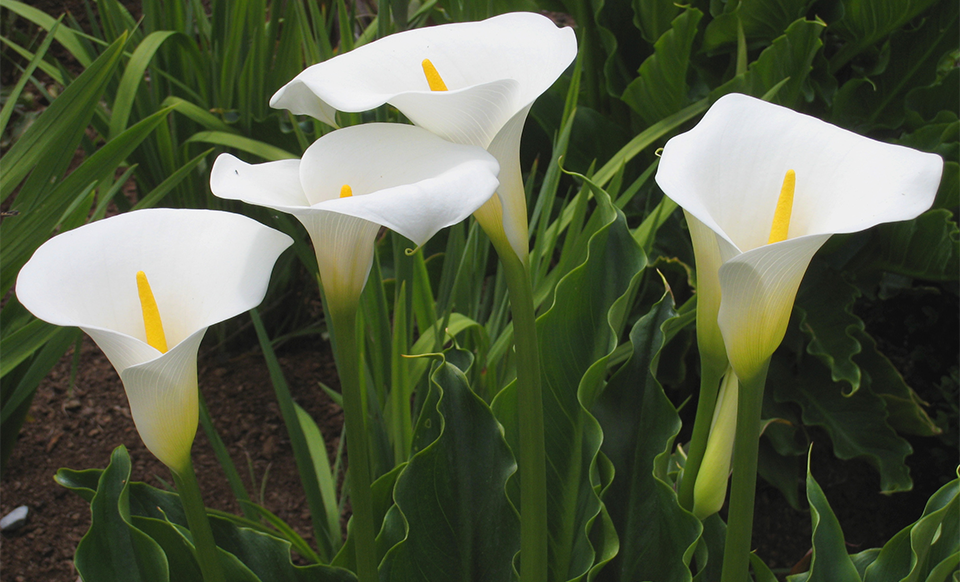 Many hybrids have been bred from the original six species of zant­edeschia. These include those from Z. elliottiana (the golden arum), known as the Elliottiana Group, which have heart-shaped leaves often covered with white dots and golden-yellow spathes. Those from Z. rehmanmi (the pink arum), known as the Rehmannii Group, have lance shaped leaves, usually without mark­ings, and white, pink, or purple spathes.

Z. aethiopica is a rhizomatous plant from South Africa, also known as arum or calla lily, with long, glossy, deep green leaves, shaped like arrowheads. The flower head consists of a large, milk-white spathe which curls back to reveal a golden yellow spadix on a stalk up to 18 in. (45 cm) long.

Unlike the many tropical hybrid zantedeschias, it is hardy outdoors in temperate regions, where flowering occurs during spring, after which there is a natural rest period. Indoor plants need to fol­low the same pattern, so after flowering, the plant should be placed in a cool spot, preferably outdoors, for the foliage to die down.

Moisture: As the plants come into leaf, and again as they die down after flowering, keep moist, but while they are in full flower, they need to be wet and can actually stand in water.

Feeding: Give standard liquid fertil­izer every two weeks, from when the plant is in full leaf until the end of the flowering season.

Special needs: If the zantedeschia is planted outdoors after flowering, it will need a marshy or wet position.