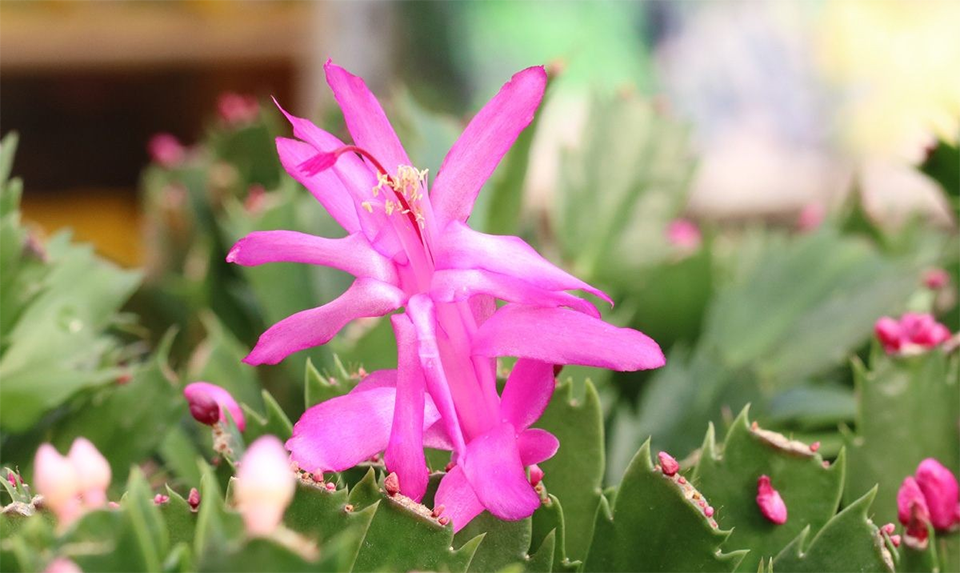 There are over 200 named cultivars of the rain-forest type Christmas cactus, all of which flower during winter. They have flowers in shades of pur­ple, pink, white, red, orange, or yel­low. The arching stems consist of oblong, flattened segments, the edges of which are scalloped or toothed, with tiny areoles set in the notches along the edges and at the ends of each segment.

The tip areoles are slightly elongated and it is from these that the flowers develop, singly or in pairs. Christmas cactus is of garden origin, although its parents are natives of Brazil. S. truncata (syn. Zygocactus truncata), the crab or lobster cactus, bears deep pink, red, orange, or white flowers during fall and winter.

Moisture: Apart from a 3—4 week rest period after flowering (when the soil should only be given enough water to prevent it drying out) keep the soil moist at all times.

Propagation: Carefully break at least two segments from the parent plant. Push into a small pot of potting soil, deep enough so that the cutting can stand upright. Water gently. Several cuttings can be inserted into a larger pot for an immediate effect.

Special needs: The buds are likely to drop off if the plant is moved, sub­jected to a sudden change in temper­ature, or over- or under watered once they have started to form. During summer, it may be placed in a shady spot outdoors, but it must be back inside before there is a risk of frost.