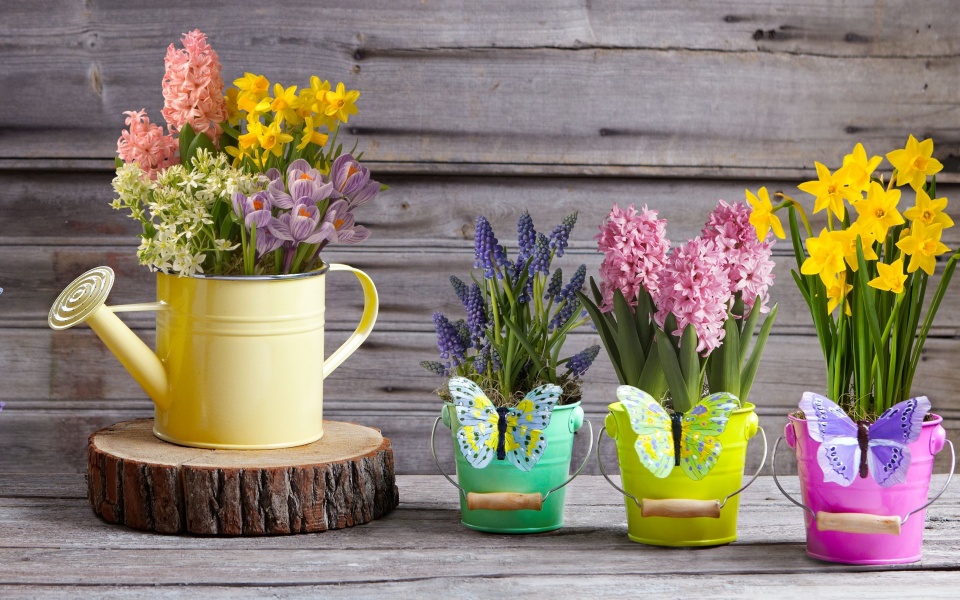 As soon as Christmas is over, and all the decorations have been cleared away, how nice it is lo see the early spring bulbs and spring flowering houseplants in the garden centers. While many bullbs are traditionally considered as outdoor features, some can be grown successfully indoors.

Bulbs, such as dwarf narcissi, crocus, and hyacinths, appear in the stores in bud well before any of the spring bulbs in gardens show through. These bulbs have been forced, but once you have enjoyed them inside the house you can plant them outside in the garden to flower again the following year. After they have finished flowering, remove any dead flowers. When the fear of frost has passed, transfer them to the garden, keeping their leaves intact, where you must feed them with a high potash fertilizer every two weeks to encourage them to flower well into the following year.

Primula obconica, with its delicate petals, makes a lovely spring plant for the kitchen windowsill. When the flowers eventually die, you can encourage extra flowering by placing the plant in a cool conservatory or on a frost-free porch where, after a short rest away from the central heating, a second flush of flowers will soon appear.

The hydrangea (Hydrangea macrophylla) is a popular spring plant, which makes a nice change from some of the smaller flowering specimens. Although you tend to buy these plants in spring they will flower well into the summer months if given the correct treatment. Hydrangeas need a great deal of moisture, preferring rainwater to hard tap water, and they are best placed in a flat-bottomed container so they can absorb water freely!

Surround the plants with damp moss to encourage humidity and keep them in a cool, bright situation. After they have finished flowering, prune back the stems and repot them into a larger container. These plants benefit from a short stay in the garden during the summer months. Simply bury the pot in a shady part of the garden, watering and feeding periodically with a high potash feed.

In fall, bring the plant indoors to a cool, frost-free room and reduce water­ing to encourage the plant to rest. In early spring, gradually increase watering to bring the plant back into flower once again.