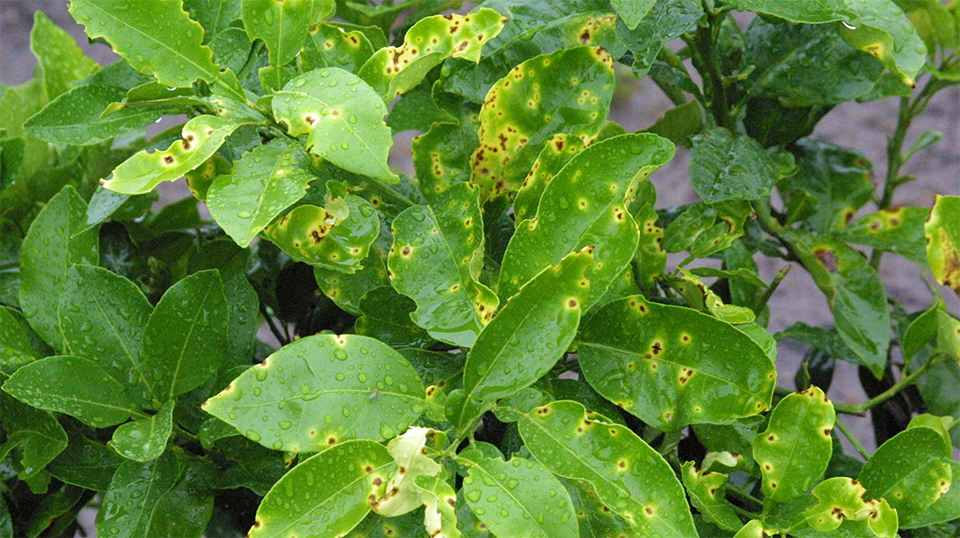 Some plants are more susceptible to certain diseases than others, so buy resistant varieties whenever possible. You can also boost a plant’s natural resistance by growing it in ideal conditions, and remove infected material and overwintering weeds that may carry diseases into the following year.

The fungus causes wilting and black foliage on large-flowered cultivars. Plant clematis 2–3 in (5–7 cm) deeper than they were in their pots; cut stems to the base if the disease strikes.

Lesions appear on bark, and white fungus grows in summer on the wounds. Avoid growing plants on waterlogged soil. Cut out affected wood and spray in autumn with a fungicide.

Dark patches on tomatoes are a symptom of calcium deficiency, caused by a lack of, or irregular, watering. Water more often and apply a tomato fertilizer every week after flowering.

Signs are yellowing leaves with black spots and sunken stem lesions. Pick off and burn infected and fallen leaves. Hard prune in late winter, then use a fungicide spray. Also, select disease-resistant roses.

Toadstools appear in autumn at the base of trees or shrubs, with a white fungus that smells of mushrooms under the bark. Black “bootlaces”appear in the soil. There is no cure, so remove the plant and all the roots to prevent the spread of this fatal disease.

This fungal disease takes hold in humid conditions, especially on spring and autumn bedding, and under glass. Flowers and leaves turn yellow or brown, and may have a gray furry coating. Soft fruits and tomatoes also rot. Remove dead material, and injured stems and leaves promptly.

A white fungus appears on leaves and stems of crops and ornamental plants, especially those growing in pots and planters, or by hedges and walls. Susceptibility increases with lack of water and poor growing conditions. Water well, avoiding the foliage, feed, and mulch to boost resistance.

Scab forms if tubers are grown in dry soil; add organic matter and water well to increase moisture. Blight is more serious and worse in wet conditions. The foliage browns and wilts, and tubers rot. Destroy all affected plants and don’t grow potatoes in the soil for three years.

A fungal disease that causes brown, orange, or yellow pustules on the backs of leaves. The spores increase in humid conditions. Pick off and destroy affected growth. Look for resistant varieties.

This black fungus is often seen on the upper leaf surfaces of evergreen shrubs. It grows on the sticky mess produced by sap-sucking insect pests. Kill the pests, and wash off the mold with mild soapy water.

The orange-pink fungus grows on dead wood but can also infect living tissue if plants are weak or poorly pruned. Cut out and destroy affected wood. Feed and water plants well to boost their immunity.

Buds on infected plants remain unopened and look silvery. In late spring they develop black bristles. Remove affected buds and take to a recycling center. There is no chemical treatment.