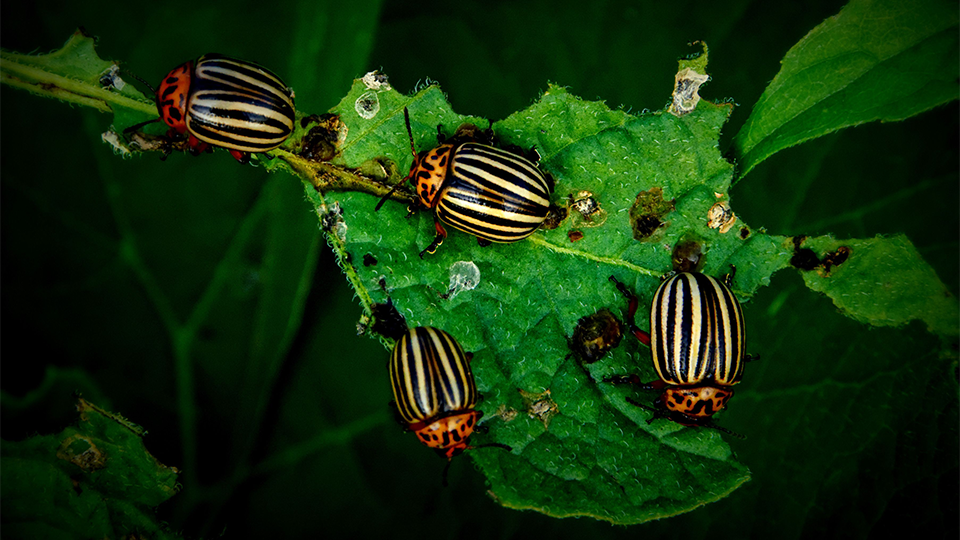 Although some pests can fly in through open windows, and some are picked up if the plant spends time outdoors during the warmer weather in summer; by far the majority are brought into the home on new plants. In order to reduce the risk to a minimum, it is worth buying from a reputable outlet where the plants have been thoroughly cared for.

More of a pest outdoors than in, ants can become a nuisance in the conservatory, tunneling alongside roots (breaking the contact between root and soil so that the root dries out) and “farming” aphids for the sweet honeydew they produce.

Remedy: Dust with ant killer and use a systemic insecticide pin.

Green and blackfly are most common. Sap-sucking insects, feeding on soft new growth, and leaving behind a sticky residue which attracts both ants and sooty mold. Spray with insecticidal soap, or use a systemic insecticide Din.

Less common indoors, although sometimes in the conserva­tory, caterpillars can damage leaves and shoot tips. Size and color varies with variety, but the body is tube-shaped, with a distinct head.

Remedy: Pick off individuals, spray with derris or use a systemic insecti­cide pin.

These minute, whitish-brown sap-suckers (a form of tarsonemid mite) which resemble dust and cause leaves and stems to become brittle and distorted, and flowers to wither and lose their color. They can be identified under a magnifying glass.

A narrow, brown, six-legged insect with a distinctive pair of pin­cers at the rear end. Earwigs eat ragged holes in the leaves and flowers of many plants, especially any which have been outdoors during summer.

Microscopic, wormlike creatures which damage roots, stems, and leaves by feeding within the plant or attacking the roots. Eelworms enjoy warm and humid conditions.

Small, caterpillar-like larvae which feed by tunneling between the upper and lower surfaces of leaves, usually in a meandering pattern, before emerging. The larva or pupa can often be seen if the leaf is held up to the light.

These are larvae of the tortrix moth, and they use sticky web­bing to roll up a single leaf or join two together to form a safe haven, from which they emerge to eat nearby leaves and stems. They are ½ – ¾ in. (1—2 cm) long, thin, green caterpillars.

Remedy: Remove affected leaves, or use a systemic insecticide pin.

Cacti and succulents art particularly prone to attack. Mealybugs are small, gray-white or pinkish soft-bodied insects, which cluster in leaf axils, on leaf under­sides, and among roots, producing a fluffy, white wax to conceal the eggs. They secrete honeydew, which attracts sooty mold.

Remedy: Spray with insecticidal soap, or use a systemic insecticide pin. Applying a small amount of paraffin wax on a fine paintbrush (to break through the wax before spraying) will help make the chemical spray more effective.

These are outdoor crea­tures, but may be picked up if the plant spends time outdoors during the summer months. They have long, segmented brown bodies, with two pairs of legs to each segment, and feed on both rotting matter and soft plant tissue.

The leaf mottling caused by these minute yellow-green, red or pink (according to the time of year) sap-suckers can be confused with a mineral deficiency, but the accompanying spiderlike webbing on the undersides of the leaves is the clue. Attacks can cause leaf distortion and stunted growth. They thrive in warm, dry conditions.

Remedy: Isolate plant and spray with insecticidal soap several times to break the life cycle, or use a systemic insecticide pin.

Very small, sap-feeding insects with brown or gray, dome shaped waxy scales (shells). Only young insects move around — once they have found a feeding site, they remain immobile. They attack the stems of indoor plants, excreting hon­eydew and causing the plant to wilt.

Remedy: Wipe off with a cloth or stiff paintbrush dipped in soapy water, spray with insecticidal soap, or use a systemic insecticide pin.

Minute gray-brown flies which live in and around humus. White larvae feed on decaying matter within the humus, but also on the living roots of seedlings. They are usually more of a nuisance than a real pest, and good hygiene helps with control.

Remedy: Sticky traps will catch flying adults. Apply insecticide as a drench to the soil mix.

Not a problem indoors as a rule, but may attack a plant left outdoors at ground level during the summer. Irregular holes are eaten in the leaves and on the stems, particularly of plants with soft, sappy growth.

Remedy: Pick off and remove individ­ual slugs and/or snails. To lay a coarse barrier around the plant, place it on a tray of angular gravel.

Tiny, sap-sucking insects which cause a silvery mottling on the leaf surface and white spots on flow­ers. Usually black with two pairs of finely-fringed wings. Young nymphs are creamy-yellow and wingless.

Remedy: Remove affected leaves and flowers, then spray with insecticidal soap, or use a systemic insecticide pin.

Larvae and adults are both harmful. Legless larvae are cream-colored with a chestnut-brown head, and eat at the roots of plants, severing them or removing the outer covering, or boring into corms and tubers. Adults are dull black in color, with a long “snout” and bent anten­nae. They eat notches into the edges of leaves.

Remedy: Remove individual adults. Biological control for the larvae (a parasitic nematode) is available. Nurseries often incorporate a chemi­cal into the soil.

Small, white, sap-feeding insects. Adults have white wings and feed on the undersides of leaves, fly­ing up if disturbed. Nymphs are like flat, oval scales. Both excrete honey­dew, making lower leaves sticky and encouraging sooty mold.

Remedy: A biological control (para­sitic wasp) is available, spray with insecticidal soap, or use a systemic insecticide pin.

Slender, orange-brown beetle larvae with three pairs of short legs near the head. They are outdoor pests, biting through seedlings just below soil level, but may affect plants left outside during the summer.

Remedy: Move the plant to another position, check the roots to remove insects, and repot.