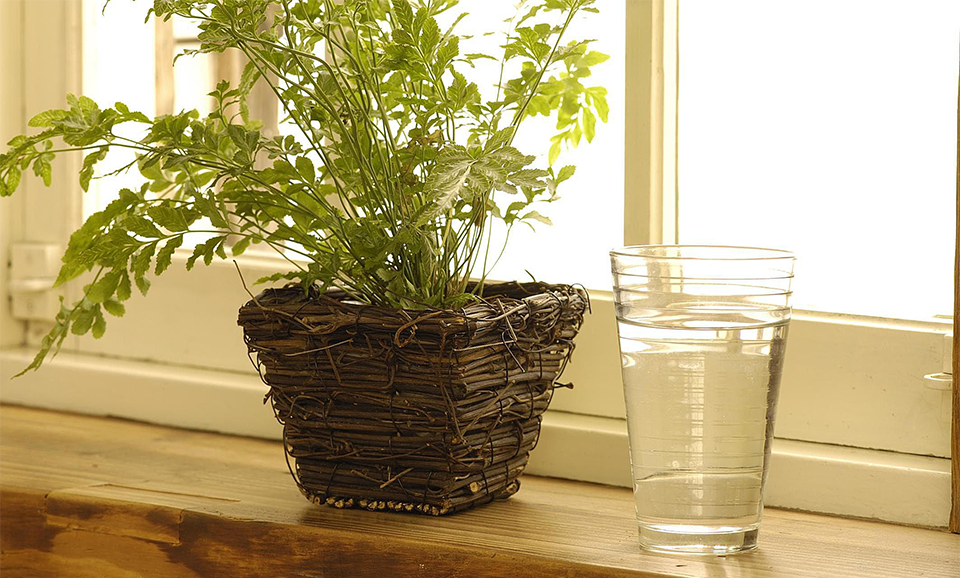 Humidity and watering are often linked because both involve moisture, but quantifying the humidity requirements of a plant is much more difficult than gauging its watering needs.

The term humidity refers to the amount of water being held as vapor in the air. This can be measured as a percentage, with 0 percent being totally dry air, and 100 percent so saturated that the vapor can be seen (as fog or steam). The amount of water vapor held in the atmosphere varies according to the temperature, since warm air holds more vapor than cold.

All indoor plants, even succulents and cacti, need a humidity level of between 40 and 60 percent to sustain them during transpiration, when water is lost through the stomata in the leaves as they open to allow the intake of gases for photosynthesis. The warmer the air, the drier it tends to be, and the more water is lost through the leaves. Thin, papery leaves — in particular, fern fronds — are more susceptible to drying out than think, leathery leaves, although both can suffer in very dry conditions. If the water is not replaced quickly by the roots, the result will be brown tips and edges to the leaves, where the cells have died. Damaged leaves will not recover and should be removed to prevent infection.

How to improve humidity

Improving humidity means increasing the amount of water vapor held in the air. This can be done in various ways. The easiest method is to use a fine- spray mister around the plant at least once a day, and more often if the temperature is high. This creates a localized increase in humidity, as the spray evaporates off the surfaces of the leaves, stems, and soil, and into the surrounding air. This effect can be enhanced by grouping several plants together, since the evaporation is trapped under several layers of foliage, causing a moist microcli­mate to form around the plants.

Small, portable electric humidifiers are conve­nient, and can be used to increase the moisture level of the air indoors, or in the conservatory (if simply soaking the floor or the soil is not an option, or the plants are all in containers). However, these can be expensive, and are therefore not an option for just one or two plants. In the home, humidity tends to be highest in steamy rooms, such as the kitchen and bathroom. As long as the overall temperature is high enough, plants that need humidity often do best in these locations.

Placing a plant on a tray containing pebbles and water allows evaporation up around the sides of the pot and past the foliage. It is important to make sure that the base of the pot itself is above the water level, otherwise the roots will rot.

The clay pot containing this azalea (which prefers cool, moist root conditions) has been set inside a larger container, lined with moist sphagnum moss. The moisture from the moss evaporates, increasing humidity levels around the plant.

Use tepid water to mist plants that like high humidity at. least once a day, and more often in warmer conditions, since the effect is immediate rather than long- lasting.