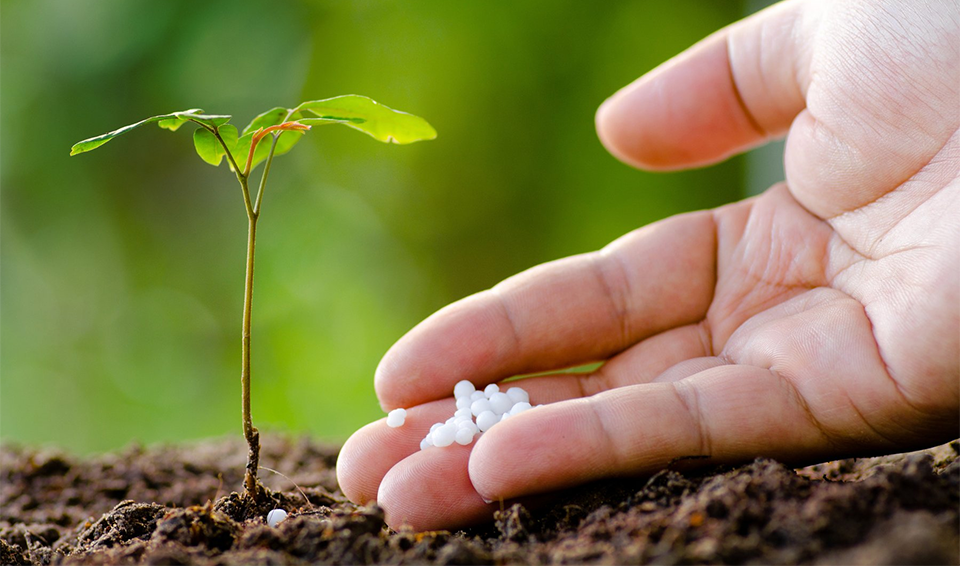 In the wild, plants draw the nutrients and minerals they need from the soil by extending their roots. In containers, however, the room for root expansion land the amount of growing medium is drastically reduced, making it vital to replace nutrients on a regular basis.

The two main a types of fertilizer available for plants are classed as organic and inorganic. Organic fertil­izers are made from a plant or animal base, and tend to be absorbed slowly by the plant, which means they are longer-lasting. Inorganic fertilizers are mineral-based and tend to be faster-acting, which means that they are used up more quickly.

All plants require three main chemical elements for healthy growth: nitrogen (N) for shoots and leaves: phosphorus (P) for roots; and potassium (K) for fruit and flowers. The amount of each of these in relation to the others in a soil mix or fertilizer is shown on the pack as the N:P:K ratio.

A balanced general fertilizer should contain equal quantities of each. Different plants require different levels of these elements, as well as needing a number of trace elements, including iron, copper, zinc, magnesium, and manganese. For example, foliage plants have a lower requirement for potassi­um than plant being grown for flowers, but a higher need for nitrogen. Flowering plants need a balance of all three main elements, changing to an emphasis on potassium as the buds develop.

Plant fertilizers contain the three main nutri­ents, plus a full range of trace elements. They are available in a variety of forms, as either quick-release or slow-release, depending on how quickly they dissolve in water.

Liquid fertilizers (including soluble powder, granules, and crystals) have an immediate effect because they are readily absorbed, and the plant should respond within a week. Foliar fertilizers are useful for plants that do not take nutrients easily through the roots, such as bromeliads, since they are absorbed directly by the leaves, acting as a rapid “pick-me-up.”

Pellets, spikes, and pills are placed in the soil in a solid form. ‘These dissolve slowly, taking longer to become available to the plant. High-potash (potas­sium) fertilizers are often referred to as “tomato fertilizers,” because they are used widely to pro­mote the production of flowers and fruit on tomatoes. These are ideal for indoor plants that need a boost to produce a good display of flowers.

Fresh soil contains nutrients, but these will not last forever. How long they last depends on the type of plant, its growth rate, and whether the soil is loam- based or loamless. Loam itself contains nutrients, and holds additional ones better than peat, which tends to release them as water passes through.

Start fertilizing plants after 6—8 weeks in a loamless soil, and after 10—12 weeks in a loam-based one, and then feed regularly during the active growing and flowering season. Plants bought from the garden center will not have been fed for two weeks before leaving the nursery (to guard against root damage, caused by a build-up of fertilizer resulting from erratic watering), so you must fertilize these plants immediately.

Most plants have a rest period during the winter months, when they do not need fertilizing, the exception being plants that flower at Christmas and need feeding then, rather than in spring or summer.

Liquid formulations come as a concentrate or as dry granules or powder, to be diluted with, or dissolved in, water. These are applied with a watering can, or in the case of a liquid foliar feed, with a mis­ter Dry formulations are added to the soil when the plant is potted, or as a top-dressing on the surface of an older plant.

Pins and spikes are pushed into the soil using the end of a pencil — but do not to place them too close to the roots, since localized burning can occur as a result of the high concentration of fertilizer. The drawback of pins and spikes is that they cannot be “switched off” as the plant goes into its winter rest period, which may result in weak, elongated growth. Slow-release granules break down over three to six months, so can be adjusted to the needs of individual plants.